The day I met Sandy

So as most of you know you by now hurricane Sandy came up the east coast and left quite an impression. While most people on the eastern sea board are used to dealing with the weather related issues that snow brings, to me there is always something more when it comes to hurricanes. They are unpredictable, temperamental and flat out dangerous. Living in Stamford and close to the water is always thought to be a perk and something that attracts people to this town. While this is true, we were all given a very stark reminder of the opposite side of the coin Monday and Tuesday. As a photographer I was chomping at the bit to get out and shoot anything and everything that I could to document this as well as see what was coming first hand. However, I have to be honest and say that I felt a little guilty using something that was sure to ruin peoples homes for my own advancement and portfolio. Though in the end I am a photographer and what I was doing was no different than what many photographers have done before me. When Monday morning rolled around most of the streets with access to the water were blocked, but I wasn’t giving up that easy. I managed to find my way to a little beach and set up shop. The waters were choppy and the clouds were rolling in. I knew that I could get a few shots that I had in my mind if I just stuck it out. Along the coastline the waves battered the sea walls and were surging with no signs of letting up. 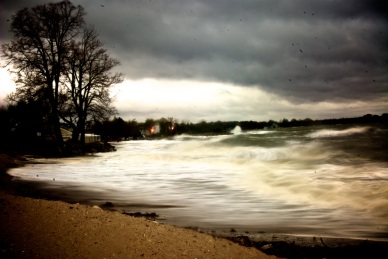 It was quite a rush knowing that you were on the edge of what was to be a major storm. The ocean is a force not to be reckoned with and while it is the most breathtaking sight to see it rage without remorse, I kept reminding myself that I had no shot if it called my number. I stuck around for about 30 minutes and convinced myself that I had enough to get started with documenting the storm. I decided to pack up my gear, but as I turned around I realized there was a whole other angle to get some waves so I pushed my luck.

Naturally the whole way home I thought to myself “maybe I should try this road” or “I bet if I went there I could get something else”. I decided to head home and see what was going on as the storm got closer. As I watched and read the news it became apparent that everyone was taking this storm very seriously. I had mixed emotions. While it made me happy to see people use their heads it also made me really think that something big was going to happen. The devastation that New Jersey sustained was unfathomable and watching it unfold was saddening all while being awe struck watching it unfold. Most of the time Jersey will get hit the hardest and suffer more damage, but when I saw just how much and how fast I was amazed. While watching Sandy roar my way I was battling the angel and the demon, do I pack up and go storm chasing or do I just stay put and watch others capture what was going down. Well needless to say, I left. As the storm approached you saw things around town that were just different, you could sense in the air and the general vibe that people were nervous and not taking any chances.

It was an eerie sight to see the trains all stopped and empty at the Stamford Train station. Supermarkets were closed, gas stations were out of gas and roads were closed. I remember very little about Hurricane Gloria back in 85, but I felt that same nervous excitement that I felt when I was a kid. Boarded windows, sand bags and road blocks. The next few hours were spent watching and waiting. That was when a mad dash was made to get to any place I could think of before it was too late. While riding throughout town there were already signs of what was to come. I just kept thinking that if this is the pre cursor to what is coming we are in for a wild night.

Once back home the waiting game began, I wasn’t sure if I was waiting for what the storm was going to bring or what I could shoot as a result of it. In the end I realized it was both. Luckily we didn’t suffer a ton of damage although in the height of the storm we did make an emergency run to a family members house because a pine tree was across their living room. A tarp to cover the broken sky light and a little clean up and my dad and I were back home to enjoy the dinner we missed when we left. But I will say the beer in the middle of the repair was just what the Dr. ordered. We got home and no sooner did we take our boots off did some branches come down and smack up our back garage. Some damage, but not the end of the world. A few beers and burgers later and all was well. The next morning I was up at the crack of dawn and ready to get out and see what happen. After tying up some loose ends with my real job I was on the loose. The next collection of shots are all post storm damage from various spots around Stamford. In closing I just want to say that I am thankful for getting out with no damage, deaths or injuries. I am also thankful for the men and women who risk their well being to go out and help those in need. Lastly, I want to thank the utility workers because let’s face it, nobody else does. Those people get the shaft so if you are one of them reading this I want you to know I am on your side. Since my cable is not fixed I have had plenty of time to catch up on tweeting, photo editing and most of all writing this post. I hope this finds all of you out there in good spirits and if not I hope this helps. 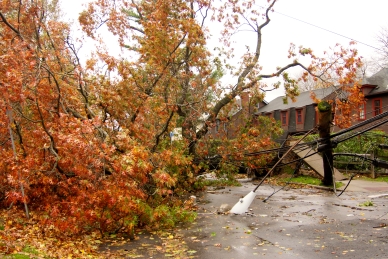 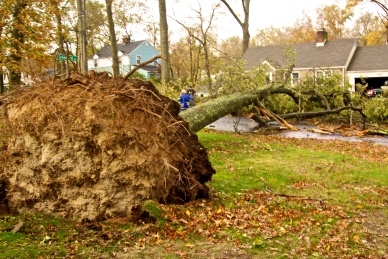 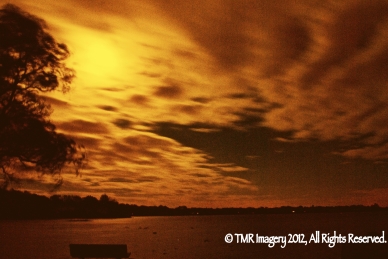 This last shot was taken the night after Sandy on Webb Ave, it is eerily serene and peaceful the nights after a major storm. I think this picture pretty much sums that up.